Ed. note: This post was written by Steven Vance and Christopher Gagnon, a Logan Square resident.

“So who is the amazing architect who designed the new McDonalds…with a utility door facing Milwaukee Ave.?  Is there some sort of safety reason for an ugly utility door being placed at that spot, in the front of the restaurant??”

Good question. This message, posted December 6 to the Logan Square Yahoo! Group, a neighborhood online discussion board, can be read as more than a criticism of the architecture of the newly rebuilt McDonald’s at 2707 N Milwaukee Avenue, as it recalls a controversial decision – and some unfinished business – for Logan Square pedestrians.

For those unfamiliar with the issue, a quick primer:

Chicago’s City Council established the “Pedestrian Streets” (“P-Streets”) ordinance to “preserve and enhance the character of…pedestrian oriented shopping districts…[and] to promote transit, economic vitality and pedestrian safety and comfort,” and this designation was applied, among other locations citywide, to Milwaukee Avenue between Kedzie and Sawyer.

When the owners of the McDonald’s located within this area decided to build a new store at their existing location, they turned to Alderman Colón for relief from restrictions imposed by the P-Street designation that would have prohibited their drive-thru operation.  In November 2011, Alderman Colón introduced a controversial ordinance (adopted June 2012) removing the area from the list of P-Streets so McDonald’s owners could obtain the necessary permits for the curb cuts and drive-thru.

In response to an inquiry from BikeWalk Logan Square, a neighborhood bike and pedestrian advocacy group, Colón asserted that removing the P-Street was “the only option” for Logan Square to keep the McDonald’s, and was undertaken ostensibly only to allow McDonald’s to keep its curb cuts and drive-thru operations. Think of it as a de facto “grandfathering” arrangement: the old McDonald’s had a drive-thru, and the new one would too, P-Street notwithstanding.  According to Colón, after the permits were issued, the P-Street would be reinstated.

Unfortunately, the new McDonald’s falls short of a P-Street in more ways than just preserving existing curb cuts and drive-thru. The new project also included a different drive-thru configuration that added a second order point, a move to increase customer throughput that outraged neighborhood pedestrian advocates, who expressed concerns that the increased traffic would also increase the potential for pedestrian-motorist conflicts.  McDonald’s was also able to gain approval for a site and building plan that skirted other P-Street requirements (discussed below).

The new McDonald’s opened December 8, 2012, and a year after the process to remove the P-Street designation began, this location remains excluded; the protections provided by this special zoning code appear to be theoretical at best.

In a December 3, 2012 email, BikeWalk Logan Square asked Alderman Colón when he expected to return this location to the list of P-Streets, but received no response. Steven eventually reached Colón’s office on January 10, and the alderman’s Chief of Staff provided an update: an ordinance restoring this location as a P-Street is scheduled for introduction to city council after the City Council Legislative Review Bureau finishes its review of the text. It could be introduced at the January 17 meeting. After referral to the Zoning, Landmarks and Building Standards, the council could consider the new ordinance for adoption in February.

1)  Building Location: The façade must “…abut the sidewalk or be located within 5 feet of the sidewalk.” The new façade is more than 7 feet from the sidewalk.

2)  Transparency: “A minimum of 60% of the street-facing building façade between 4 feet and 10 feet in height must be comprised of [sic] clear, non-reflective windows that allow views of indoor commercial space or product display areas. This standard applies to building façades that face pedestrian streets.” The new façade, according to our measurements and calculations, comprises just 42% clear, non-reflective windows (plus one door), with the balance comprising solid masonry and the aforementioned windowless metal utility door.

(As an aside, while the ordinance doesn’t prohibit the installation of a windowless metal utility door in the façade, as the Logan Square Group member’s comment above suggests, the inclusion of such a door seems incongruent with the spirit of the P-Street.) 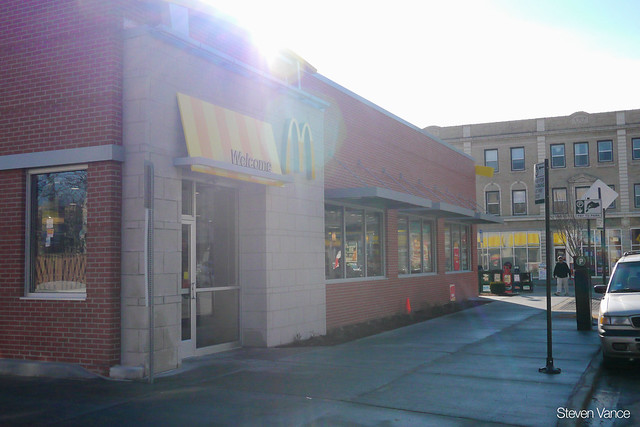 The main entrance to the building was placed on Sawyer Avenue.

4)  Parking: “All off-street parking spaces must be enclosed or located to the rear of the principal building and not be visible from the right-of-way of a pedestrian street.”  The majority of the parking lot at the new McDonald’s is located beside the building, on Milwaukee Avenue, rather than at its rear, and is plainly visible to pedestrians on Milwaukee Avenue.

To its credit, the McDonald’s appears to have attempted to honor the bicycle parking requirements of Chicago’s zoning code. However, the design of the fixtures and location of the bike parking, behind the building, is inconsistent with current CDOT (and nationally accepted) bicycle parking design standards.  While CDOT likely reviewed and approved the project, the bike parking plan was never reviewed by CDOT’s Bicycle Parking Program. [Disclosure: coauthor Christopher Gagnon served as CDOT’s Bicycle Parking Program Manager during this period.]

5)  Driveways and Vehicle Access: “Vehicle access to lots located along pedestrian streets must come from an alley. No curb cuts or driveways are allowed from a pedestrian street.”  Because this project required the demolition of the existing building, and construction of a new one, the owners had no entitlement under the P-Street to retain the existing curb cuts providing access to the parking lot and drive-thru. Therefore, removing this location from the P-Street provided the only mechanism for McDonald’s to include a curb cut – new or existing – on Milwaukee Avenue.

And of course, the requirement that started it all:

Could it have been done better?

You might think, “too late, it’s a done deal.”  Perhaps so.  But something very important remains to be done: reinstating this location in the P-Street ordinance. Colón’s chief of staff assured us that no other permits were issued in the area in question while the P-Street designation was lifted.

To be clear: the McDonald’s owners didn’t precisely do anything “wrong.”  The alderman arranged the lifting of P-Street restrictions, and as a result, the new McDonald’s had no duty to comply with them–and it doesn’t, in many regards.

Here are some suggestions on how the McDonald’s owner could have designed a store that wouldn’t have required the removal of P-Street restrictions for this location, and which would better integrate with the neighborhood’s pedestrian- and transit-friendly characteristics and the surrounding architecture.

Even without a P-Street designation, McDonald’s’ owners could have voluntarily implemented the following improvements:

What to take away from this

Given the controversy surrounding the alderman’s decision, and the importance of preserving the pedestrian character of this stretch of Milwaukee Avenue, what should the community expect from its corporate neighbors–particularly those seeking favors and special access from our elected leaders? Is it sufficient to do only what is required by the letter of the law, or should we expect them to do better, to do more, in exchange for this privilege?  And what should we expect from aldermen who grant these special privileges?  Should the alderman get something better for the community in return?

McDonald’s could have enjoyed the benefit of the special privileges they were granted, keeping their curb cuts and drive-thru, while still respecting the spirit of the P-Street. Instead, it seems they took full advantage of the temporary elimination of the P-Street designation to build what they wanted, seemingly without regard for the expressed needs and desires of the community from which they profit.

Unfortunately, piecemeal tinkering with the zoning code to facilitate pet projects is a favorite pastime for many Chicago aldermen.  It’s difficult to avoid the question: what is the value of the P-Street ordinance, when aldermen can easily disable it at will?

There are two new discussions on EveryBlock that started from this article: