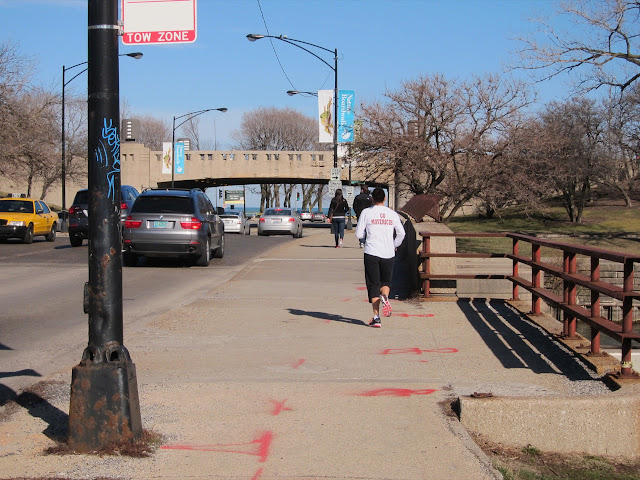 1. Elimination of the sidewalk on the south side of the bridge

People walking on the south sidewalk from points west toward the lake front trail will be routed onto a curved path down toward the lagoon, then northward under the under pass, then either up a set of stairs or around a looping path upward, then turned around to face east again, and over the bridge, under the Lake Shore Drive underpass, and then onto the lake front trail.

That’s a long walk for what is currently a short trip.

2. Fullerton Parkway will have an additional lane added for car traffic for the intended purpose of easing car traffic on Fullerton.

Adding this right-turn lane is being described as an improvement of safety for pedestrians since there are  “fewer points of conflict” with car traffic, but it is being done by simply eliminating the presence of pedestrians.

The 3 pedestrian and bicycle crashes within 100 feet of the Fullerton Parkway and Lake Shore Drive on-ramp intersection that will be redesigned to improve safety. I can list 20 other intersections that need their pedestrian safety improved before this one, starting with Madison & Cicero, where there were 36 crashes within 100 feet, from 2005-2010.

The 13 pedestrian and bicycle crashes within 100 feet of the Lakefront Trail and Montrose Avenue, adjacent to the Lake Shore Drive ramps.

3. Lack of accommodation on the street for people riding a bicycle to and from the Lake Front Trail

Since Fullerton is already scary to ride on, most people on bicycles currently ride on what I always considered a sidewalk, since it’s concrete, and it looks and feels like a sidewalk. When I brought up this issue at the meeting, CDOT staffer and former chief bridge engineer Dan Burke said that it’s actually a mixed use trail once you enter the park east of Lincoln Park West, and bicyclists can and should use the “sidewalk”. Apparently, [westbound] bicyclists are now expected to take the path with its up and down grading and loop de loops. 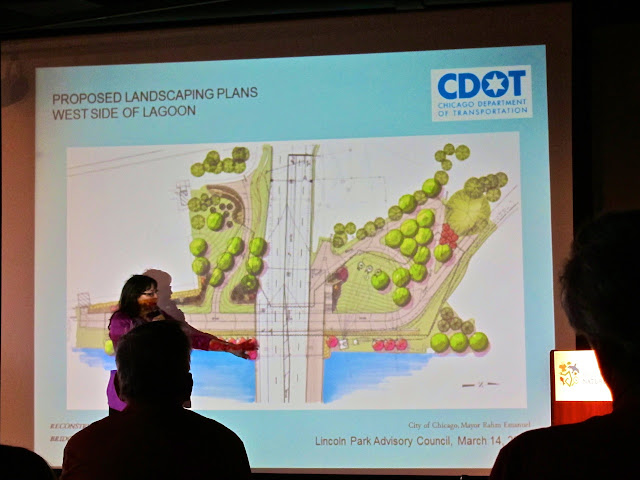 On this drawing, north is to the right. It reflects the deletion of the south sidewalk, and the looping path onto which all east- and west-bound pedestrians and bicyclists will be routed.

What’s the problem? The City of Chicago and the State of Illinois both have complete streets policies (so does Cook County, but they’re not involved here). The policies dictate that all transportation modes and all users of a transportation system (especially the most vulnerable users like children and elderly) are considered in the planning, design, and construction of any transportation infrastructure project. The City’s is merely a policy adopted by the City Council in 2006, but the Illinois’ belongs in state law and took effect July 1, 2007.

Illinois’ complete streets policy mandates bikeways except when the Secretary of Transportation approved an exemption based on “excessive cost or absence of need”. (There are other exemptions, but I don’t believe them relevant to this project.)

The Illinois Department of Transportation is probably involved in this because it has jurisdiction over the on-ramps leading to Lake Shore Drive and this project encompasses those. I’m concerned at how this project, and countless others that don’t pass Complete Streets muster, was able to continue with its severe lack of consideration for two transportation modes. While you could argue that some conditions for pedestrians are being improved, mobility is being reduced by eliminating an entire sidewalk and elongating the travel distance for pedestrians who started their trip on the south side of Fullerton Parkway.

Excusing the design of this project’s shortcomings by saying planning and design work started before the current pro-sustainable transportation administration, or the adoption of complete streets policies, ignores the needs and demands of people living here today and now.

Read our other articles about the lack of attention paid to complete streets.

Other discussions on this topic