At Ogden Avenue, where the bike lane ended but continues 1.5 years later.

One of the first protected bike lanes to be installed was Jackson Boulevard, back in 2011. Although the Jackson ptoected lane was originally slated to extend from Western Avenue to Halsted Street (1.5 miles), with some buffered bike lanes within that section, construction stopped at Ogden Avenue while the Chicago Department of Transportation (CDOT) finished design negotiations with the Illinois Department of Transportation (IDOT). The state transportation department has jurisdiction over the segment from Ogden Avenue to the end of Jackson at Lake Shore Drive (Route 66), and IDOT wanted more info about the proposed lane from CDOT.

More than 1.5 years after the original bike lane installation on Jackson, the missing segment got its buffered, instead of protected, bike lane in December.

The segment between Ashland Avenue and Laflin Street, an historic district, is too narrow to have a bike lane without removing a travel lane so CDOT installed shared lane markings instead. If more people start riding bikes at the intersection of Jackson and Ashland, I foresee many conflicts at two points: drivers must turn left from the left-most lane across the bike lane path or from the bike lane itself; drivers and bicyclists going through will meet each other on the opposite side of Ashland as they head straight to the middle of the same lane on Jackson.

As is often the case in Chicago, some drivers are using the new buffered lane on Jackson as a parking lane.

Where people riding bikes need a dedicated lane most on Jackson is east of Halsted, approaching Union Station, past the Chicago River, and towards the Financial District, State Street, and Wabash Avenue. Aside from the addition of new bike-friendly concrete infill on each side of the metal grate bridge, there are no plans to extend the Jackson bikeway east of Desplaines Street (the first street east of Halsted). The one-block extension to Desplaines Street, which has some semblance of a protected or buffered bike lane where it meets Jackson, is listed in the Streets for Cycling Plan 2020 as a “Crosstown Bike Route” to be installed between May 2013 and May 2014.

An overhead view of the new design. View all images and site plans.

Ed. note: In the spring of 2011, I suggested friends and readers of my blog Steven Can Plan write letters to the Chicago Department of Transportation about the distinct lack of bicycle infrastructure in the plan to redesign the intersection and streets at Damen Avenue, Fullerton Avenue, and Elston Avenue. It’s more than an intersection overhaul.  I then reported that it appears the letters you and I sent were positively received and bicycle infrastructure was added to the plan. The project, now set forth, will have three separated intersections (which should reduce the complexity of traffic signal cycles and automobile turning movements) all connected by roads with four travel lanes. Elston and Damen Avenues will have protected and conventional bike lanes, respectively. A Grid Chicago reader emailed us three weeks ago to ask us to reconsider our support for that design.

Tony Horvath lives in Lakeview and is a business analyst for Merrill Corporation. He doesn’t own a car but remembers the intersection from when he used to own a car and drove through it often. He commutes by ‘L’ but has also biked through the intersection and in the area. -Steven END_OF_DOCUMENT_TOKEN_TO_BE_REPLACED

Cars are currently being parked in the Desplaines bike lane, but probably not for long. Photo taken just south of Madison Street.

This is an exciting moment for cycling in Chicago as the department of transportation races to meet its goal of reaching a total of thirty miles of protected and buffered bike lanes before it gets too cold to lay thermoplastic. As Steven wrote yesterday, CDOT began installing new traffic signals last weekend for the eagerly awaited, two-way protected lane slated for a 1.2-mile stretch of Dearborn Street between Polk and Kinzie streets.

Since Mayor Emanuel himself declared the lane would be built this fall, if the weather holds up it’s likely this “game-changing” facility will soon be completed. As the first protected lane in the central Loop and the first two-way protected lane, Dearborn will probably draw some criticism from the anti-bike crowd. But the 4,500 signatures the Active Transportation Alliance recently collected in support of the lane prove that plenty of Chicagoans are looking forward to getting a first-class downtown bike commuting route.

Grid Chicago readers alerted us that CDOT also began striping new protected bike lanes on Desplaines Street in the West Loop last weekend, so yesterday afternoon I pedaled downtown for a look-see. From Kinzie to Fulton Street, a two-way section, the department is putting in “enhanced” shared lane markings, the same type that were recently installed on Wells Street south of the river. These markings encourage cyclists to ride in the middle of the lane; presumably “Bikes may use full lane” signs will be installed, as they were on Wells.

END_OF_DOCUMENT_TOKEN_TO_BE_REPLACED

Chicago Department of Transportation Bureau of Electrical Operations workers were out in force on Saturday and Sunday installing new traffic signal poles and signals. The Dearborn Street cycle track project, a two-way bike lane on the left side of the one-way road, includes bicycle signal heads pointing north and south. Also new are signal heads for northbound Dearborn Street traffic that will turn left across the cycle track. 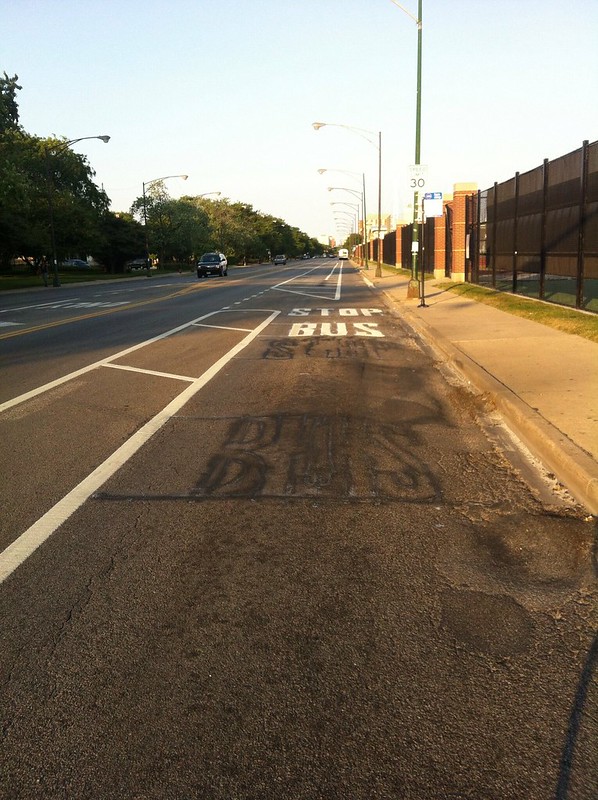 The eastbound bike lane begins at this bus stop at Cottage Grove Avenue.

Room for the cycle track is made possible by removing a travel lane in each direction. Elements of this project that are different from previous bike lane projects in Chicago are the mixed traffic areas for right-turn lanes and bus stops. END_OF_DOCUMENT_TOKEN_TO_BE_REPLACED