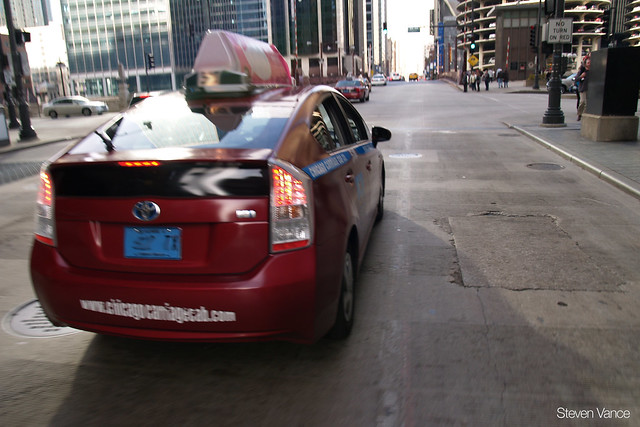 The taxi driven by the man who harassed me and against whom I testified in an administrative hearing.

This is the story of my being harassed by a taxi driver while cycling in downtown Chicago the day before Thanksgiving in November 2011. I was riding from Grant Park to meet my mother and sister for lunch at Xoco (449 N Clark). It’s also a set of loose instructions on curbing car culture.

The article is divided into three sections: the incident, the hearing, and the results. I am not revealing the taxi driver’s name or cab number: he’s already had his hearing and received due process; additionally, he may not always drive the same cab number. On the day of the incident, November 25, 2011, he leased his cab from the Chicago Carriage Cab Corp.

If you feel unsafe from the behaviors of a taxi driver, call 311 immediately after composing yourself and ask to file a complaint against a taxicab driver. You must have the time, location, and taxi number. If your immediate safety is threatened, call 911 first.

This is the description I submitted to the Chicago Department of Business Affairs and Consumer Protection, who regulate public chauffeurs.  END_OF_DOCUMENT_TOKEN_TO_BE_REPLACED

Krause is tired of going Nuts on Clark waiting for for the slow-moving #22 bus.

Acid jazz pulsed on the sound system as a group of stylishly dressed transit fans clinked wine glasses last week at Vapiano, a sleek Italian restaurant at 2577 North Clark Street in Lincoln Park. They were there to launch the Chicago Streetcar Renaissance, a campaign to create a world-class streetcar line on Clark from the Loop to Wrigley Field, and eventually add lines in other parts of the city.

“Our mission is to grow the economy and the population of Chicago every year while reducing traffic congestion and making the city easier to get around,” says John Krause, 45, the architect who founded the movement, nattily attired in jeans and a dove-gray sports jacket. “That means every year there will be more people and fewer cars, more commerce and less congestion.”

He has a vision of the clogged traffic and the notoriously sluggish buses on Clark replaced by efficient, comfortable streetcars, more pedestrian traffic, on-street cafés and broad bike lanes. “The only way you can get rid of cars is to replace them with something better,” he explains. “In a car paradigm everybody assumes the city is going to grow more and more congested. But a public transit system is the opposite. The more people who use public transit, the better it gets.”

END_OF_DOCUMENT_TOKEN_TO_BE_REPLACED

Rendering of the MIT CityCar by Franco Vairani. Post updated 9:57 to add commentary on parking.

This morning, RelayRides will announce it is updating its system on how neighbors share cars. Before, only cars with OnStar and smart card systems could be used (like how I-GO and ZipCar operate now). The change is that anyone with a car can sign up to lend it, for as little as $5 per hour, using a key exchange: the owner and the renter arrange to transfer the key.

I’m looking forward to seeing how this works in practice. I’m going to convince my roommates and friends to sign up their cars. Individual car ownership does not bode well for our society, economy, and environment. The kinds of cars we own have a less significant impact than how we drive them. How we drive is what makes our car culture. The one that costs us more than we can afford, pollutes the environment, and sustains a sedentary lifestyle. END_OF_DOCUMENT_TOKEN_TO_BE_REPLACED