I looked it up. “Night” in this analysis means situations where the Illinois Department of Transportation crash data is coded as “Darkness” or “Darkness, lighted road”. I’ve divided the data in a table below to show the difference between those two designations. END_OF_DOCUMENT_TOKEN_TO_BE_REPLACED

Let’s be thankful that federal funding for safety programs like Safe Routes To School and bicycle and pedestrian enhancements haven’t been entirely cut and there are politicians who defend these programs (aside from Representative Earl Blumenauer from Oregon, I can’t name any others).

This map, first published by The Guardian, a British newspaper, shows a point for every traffic-related fatality in the United States between January 1, 2001, and December 31, 2009. The map was created by ITO World, a transportation data company, using information from the National Highway and Traffic Safety Administration (NHTSA), part of the U.S. Department of Transportation. 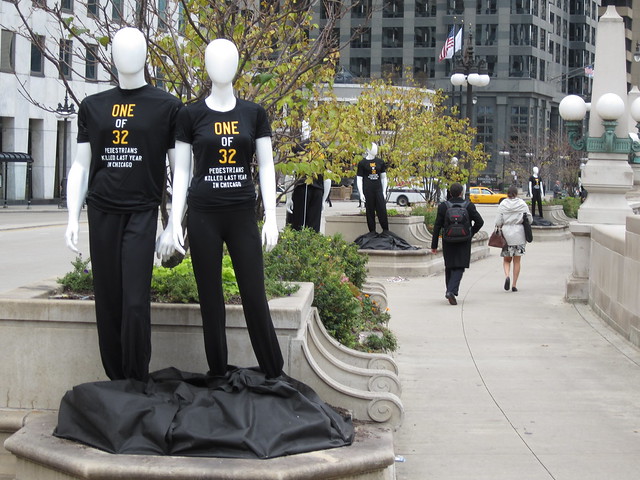 END_OF_DOCUMENT_TOKEN_TO_BE_REPLACED

Photo of attention-grabbing mannequins on Wacker Drive represent the 32 people in 2010 who, while walking, were killed by drivers and automobiles in Chicago. Photo by Kevin Zolkiewicz.

Grid Chicago reader Kevin Zolkiewicz has written about the City of Chicago’s campaign to reduce pedestrian fatalities to zero by 2020.

Among the most visible of the initiatives are 32 mannequins that have been installed along Wacker Drive between Wells Street and Michigan Avenue. Each mannequin represents a pedestrian killed in Chicago last year. Klein hopes that the mannequins, combined with other campaign ads that will be plastered on buses, street furniture, and trash bins throughout the city, will encourage drivers to stay alert for pedestrians.

CDOT’s pedestrian safety campaign will involve 15 different initiatives — ranging from awareness campaigns to enforcement — that the agency hopes will change driver behavior and make the city a safer place for pedestrians. Read the full article.

Grid Chicago’s John Greenfield also attended the press conference this morning at 10 AM at Wacker and Wabash and will be writing about it for tomorrow’s feature.

According to the Chicago Department of Transportation on Twitter, the mannequins will be visiting other neighborhoods.