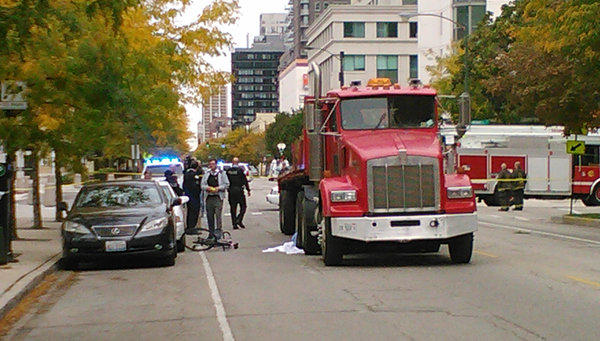 END_OF_DOCUMENT_TOKEN_TO_BE_REPLACED

At the June 13, 2012, Mayor’s Bicycle Advisory Council meeting, we asked Mike Amsden if the Wells Street “enhanced” marked shared lane would be accompanied with signs that say “bikes may use full lane”. He said “no”.

Things changed, as photo contributor Adam Herstein noticed this morning. He says this sign is posted at each intersection (from Wacker Drive to Van Buren Street, we presume, which is the length of the “enhanced” marked shared lane).

A larger version of this sign exists, but the unique situation of the ‘L’ track colums might prevent objects from exceeding the column width, unless they were higher up to avoid being smashed by trucks.

END_OF_DOCUMENT_TOKEN_TO_BE_REPLACED

CDOT staffer Mike Amsden describes the city’s commitment to bicycling in a presentation about the progress of the Streets for Cycling Plan 2020.

Yesterday’s Mayor’s Bicycle Advisory Council (MBAC) meeting was the first in a new format we reported on back in December. There was a meeting in March, but its schedule wasn’t announced. The new format resembles the original format in 1992, when Mayor Daley started MBAC, with formally defined membership. It’s now modeled on the Mayor’s Pedestrian Advisory Council, according to Luann Hamilton, deputy commissioner of project development at the Chicago Department of Transportation (CDOT). She expounded:

We’ve added so many issues. When we started, biking in Chicago wasn’t a health issue, it was a recreation issue. Once it was linked to health, it brought in a whole new group of people that needed to be connected. Bring more voices, more diversity. Modeled after our MPAC which was formed in 2006 (also has technical and stakeholders committees). Some represent agencies, others are advocates, community members, all who want to make streets safer and usable by all travelers.

The council can be active again, vote, carry motion, write a letter. I think we were instrumental in creating changes, like at CTA and Metra [getting them to allow bicycles on buses and trains]. I think this Council can have a powerful voice. All the folks who have come over the years can still come and make presentations.

The first hour is for members to speak and present. The remaining half hour is for public comments and discussion. Hamilton answered affirmatively to Active Transportation Alliance executive director Ron Burke’s question about whether or not she anticipates the council being able to make recommendations. END_OF_DOCUMENT_TOKEN_TO_BE_REPLACED

Bikeway construction in 2012 continues at a breakneck pace. Crews were installing a buffered bike lane on Franklin Boulevard on Wednesday, between Central Park Avenue/Conservatory Drive and Sacramento Boulevard (0.75 miles) in East Garfield Park. The safety project eliminates a travel lane in each direction, creates a center left turn lane, and refreshes crosswalk markings. Adding a concrete barrier or parked cars could make it a protected bike lane. Read John’s earlier article about bikeways in this neighborhood, Are the upcoming Streets for Cycling projects in good locations?.

The abysmal pavement condition in the bike lane should have been repaired before bike lane markings were striped. The Franklin Boulevard buffered bike lane connects to a conventional bike lane on Central Park Avenue/Conservatory Drive (which connects to a bikeway on Lake Street coming soon). Sacramento Boulevard doesn’t have a bikeway.

CDOT should address this unsettling missing sewer cover and other deep potholes and pavement cracks in the bike lane. See all 18 photos. END_OF_DOCUMENT_TOKEN_TO_BE_REPLACED